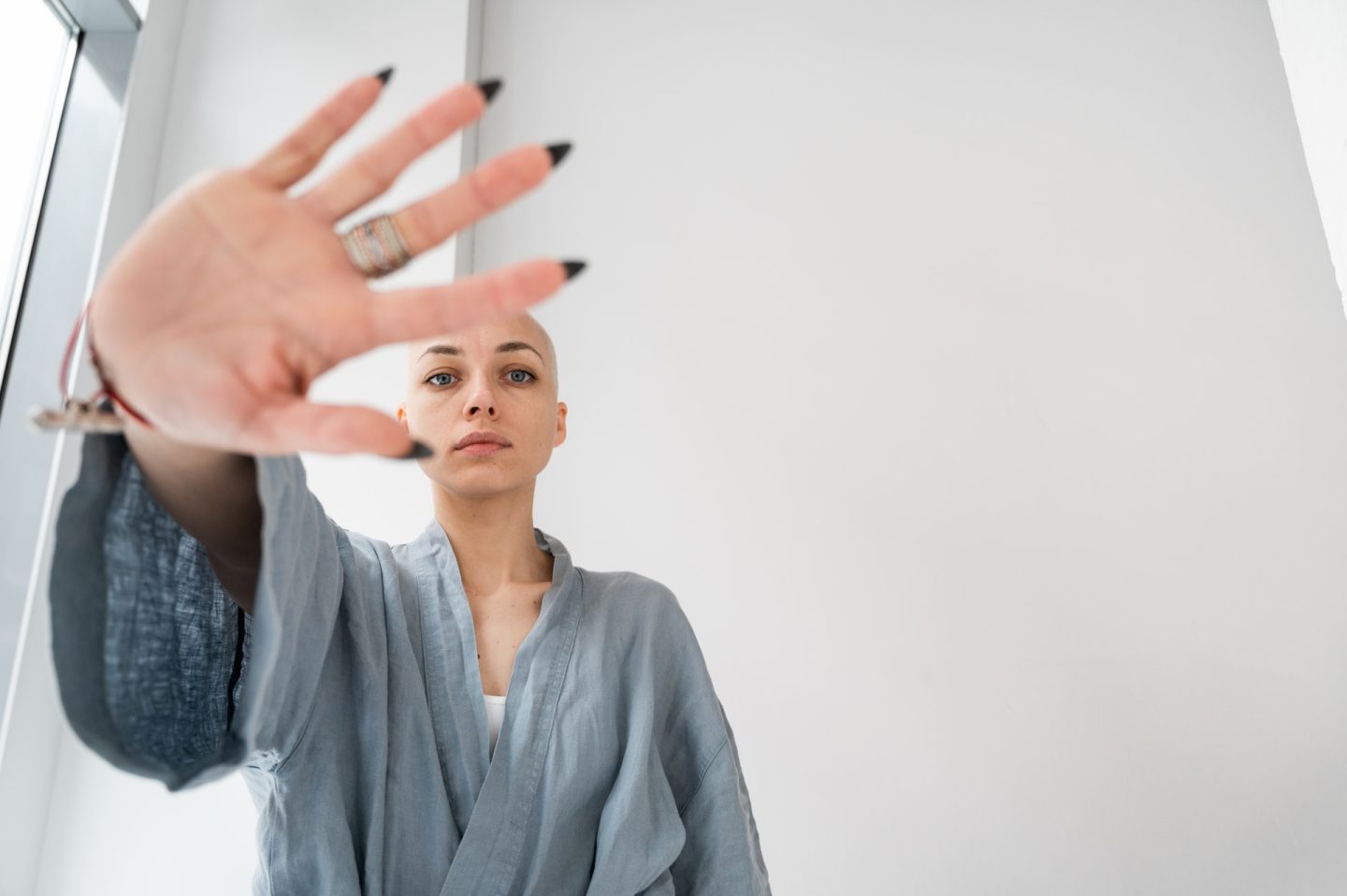 Boundaries separate us from others physically, socially, and emotionally. We often hear “boundaries” thrown around in regard to relationships that aren’t serving us anymore, whether a recent (or about-to-be) ex, an app match who isn’t getting the not-interested hint, or a homophobic family member. Sometimes, if you haven’t had healthy boundaries up until a certain point, a situation might inspire you to set some. But it can feel way better to incorporate healthy boundaries all the way along – they won’t stop you from winding up in those situations completely, but they are a valuable toolset to use if you do.

Everyone Has Boundaries and Limits

If you’ve heard of the lesbian “urge to merge,” boundaries are the opposite of that. And that’s a good thing! Any type of relationship has two (or more) people in it, and boundaries keep it that way.

Boundaries are also just a way to say that what you want is on one side of a line, and what you don’t want is on the other side, with a few important caveats.

A healthy boundary describes your needs and actions in a situation, not those of others.

To take a classic example, let’s say you’re in a dating relationship with someone who’s close to their most recent ex. You know that lots of people have such friendships – you actually cat-sat for one of yours last summer when her first sitter bailed at the last minute – but from what your dating partner has told you about the situation, you’ve been wondering if there are unresolved feelings. She also texts her ex when you’re together, has cancelled on you once or twice when her ex got locked out, and brings her up enough that sometimes you feel like you’re dating both of them (and not in a hot way). You know relationships are complicated and evolving, and you’d be okay with any one of these things, but not the picture they paint all together.

An unhealthy way to set a boundary would be to say, “If you don’t stop all contact with your ex, I can’t date you anymore.” Why is this unhealthy? It’s trying to control the way someone else relates to those in their life. It makes the issue about the other person (control), instead of about you (a boundary). It’s also ineffective, because it’s a surface statement – you need her to stop seeing this one ex – instead of getting at the underlying issue – you want a partner who can be emotionally and physically present with you when you’re together.

A healthy way to set a boundary would be to say, “I choose to date only people who can be emotionally present with me.” Why is this healthy? It focuses on the space you need to thrive, not on the way others act or feel. It doesn’t try to control someone else, simply states what you will do in a given situation. And it goes bigger than your interaction with one person to look at your overall needs. You don’t need this one dating partner to block this one ex; you need anyone you date to be able to be present and available for connection with you. It’s okay if she wants to stay enmeshed with her ex – it just means you can’t date and need to remove yourself from the relationship.

A boundary without follow through is a threat. Stating that you have a boundary around something, and then repeatedly not upholding it, makes what’s happening more about the way the other person responds than about your own boundary, and also weakens that boundary.

For example, say you’re having a Zoom movie date, and you know you need to end the date at 11. You tell your date you’re excited to see them, and just so they know you have to go at 11. At 10:30, they tell you they just want to hang out with you all night, and you laugh and say “same, but I still gotta go in 30.” At 11, your movie ends, and you start to say goodbye – and they, acting jokingly and in a way that makes sense for the conversation, press play on the sequel.

If you follow through on your boundary, it might look like this: you do; really want to see the sequel, and you’re having such a nice time, and it’s so annoying that you have to get up for work tomorrow anyway. But you said you needed to go to bed at 11, so you unmute your mic and tell them “Ha, I wish! Let’s text tomorrow to figure out when we’ll watch that together.” You get to feel a little wistful about not staying up, but feel great that you honored what you needed, and your date can appreciate that when you say things you mean them.

If you don’t follow through on your boundary, it might look like this: you’re having such a nice time and they already pressed play. You had an afternoon coffee anyway. You stay up watching the movie, deciding that this time you don’t have to follow through on what you said. Over a few weeks or months, you end up staying late a few times – one of you says “we should go to bed” and yawns dramatically, the other presses play on one (or three) last screenings, you’re tired a lot but you like hanging out so much and it’s quarantine so what does it matter? Then one day you really, really need to go to bed early. You start to end the call, but they think – because they have months of evidence – that you don’t really need to go to bed on time tonight, so they press play anyway. You feel pretty upset that they violated your bedtime boundary – but you spent months violating it on your own every time you knew you had to go to bed at a certain time, said so, and didn’t. How could they have known that this time was different? Maybe you argue and maybe you don’t, but either way you both leave the interaction feeling bad.

Sometimes, it’s hard to honor your own boundaries. We all get tired, want to keep opting in to a good time, or want a situation to just go smoothly sometimes. But consistently honoring your own boundaries is the best way to keep them strong and intact.

Pay Attention To How People Respect Your Healthy Boundaries

There’s a saying that anyone who gets upset at you setting (healthy) boundaries benefitted from you not having any, and it is true that anyone who gets really angry with a boundary of yours is showing you a red flag. To return to the movie example, let’s say the first time you say you have to go at 11, you say goodnight and get off of Zoom at 11, turn off your phone, and go to bed – and wake up to a pile of messages in the morning where your date tells you she thought you were having such a good time and doesn’t know what happened, you made her feel so rejected, you must not be that into her, and she can’t believe you went to bed that early, maybe you shouldn’t see each other again, she has to think about things, also can you hang out more tomorrow. That type of response to you setting a healthy boundary is something to pay attention to. (In this case, it’s saying “do not keep dating this person.”)

If someone repeatedly gets angry about your healthy boundaries, takes them personally, continues to not honor them, or all of the above, you should remove that person from your life. You deserve better.

Playing the Victim? Here’s How to Stop