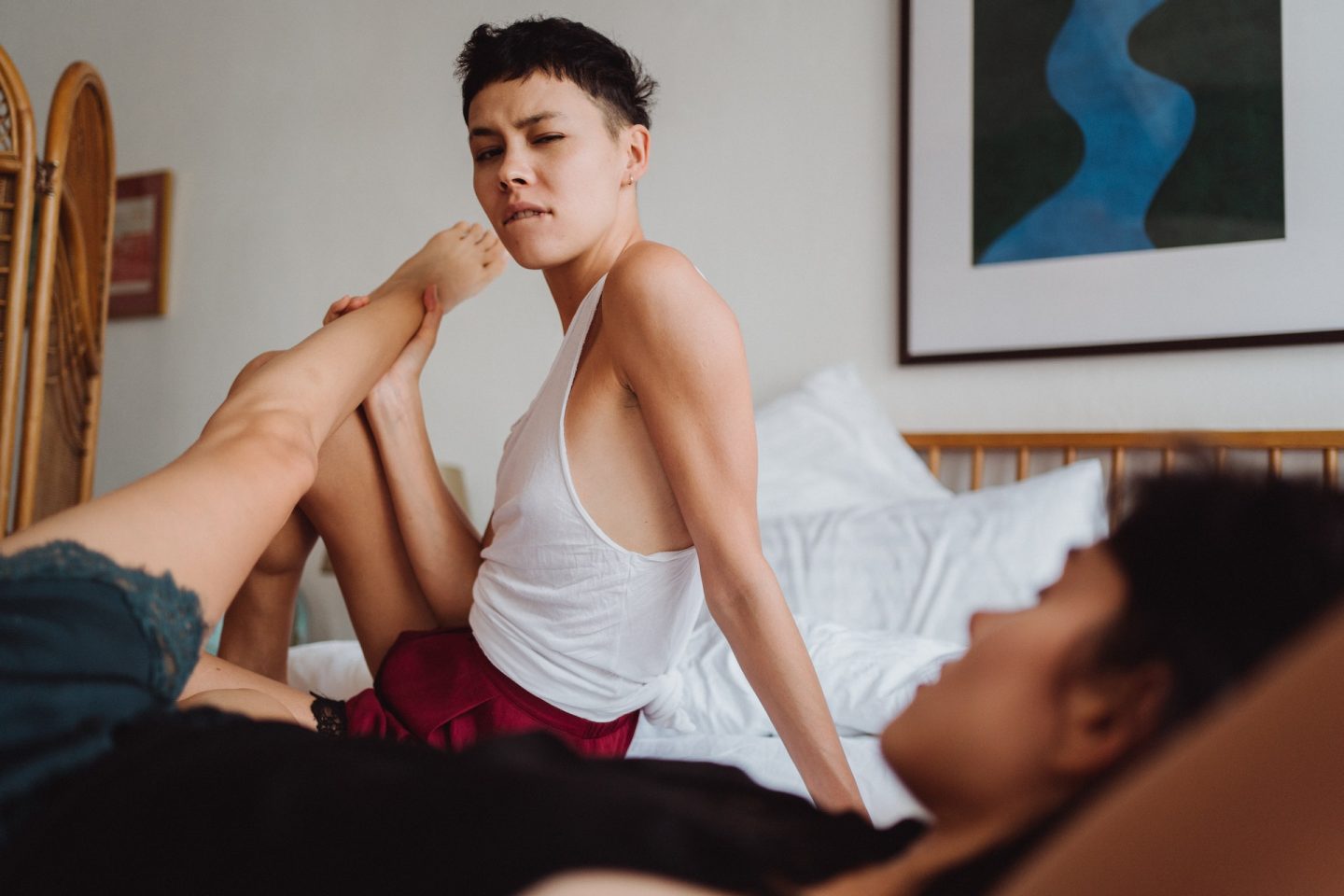 No matter where you fall, today is the day that you can get a real answer on scissoring: what it is, what it isn’t, how you do it, and whether it’s something that should be part of your sex life. Here’s everything you’ve ever wanted to know about scissoring:

What actually is scissoring?

At its most basic, scissoring is a sex act designed with two people with vulvas in mind — those two people are reclined with their heads facing away from each other, and feet facing towards each other, and intertwining their legs so that their vulvas can rub together. The idea is that at the right angle, both peoples’ clitorises can stimulate each other, ideally to something like simultaneous orgasm.

The name of the act presumably comes from the image of two pairs of legs; while they don’t actually move in an opening/closing motion, you can imagine how they’d have to be sort of half-open for this position to work, so a little reminiscent of scissors. Some people feel like the positioning and physical logistics of this way of having sex are so clunky or awkward relative to the level of pleasure they feel from it that it’s not realistic as part of someone’s everyday sex life. This is where we get into questions about whether or not scissoring is “real.”

How do you do it?

It’s definitely true that positioning for scissoring that feels great for everyone involved can take some practice. It likely won’t work to be fully laying down; you need to have some kind of leverage for any kind of motion with your body that would create the friction that feels good, which is hard if you’re laying down flat.

For some folks, laying down most of the way and propping up on one or two elbows works best; other people find it feels best to sit almost all the way up or sit propped up on a low wedge pillow. Remember also that you and your partner don’t need to be perfectly symmetrical or matching; it might work best to have one of you sitting up straighter or braced against a pillow, and one of you laying back further. In any case, it’s usually best to bend the knees and lift one partner’s leg over the other. After finding a position that works for you, it’s a matter of trying out grinding, thrusting, and hip motions to create friction that feels good for you and your partner both.

What if that doesn’t work for me?

That’s totally possible, and if so, doesn’t mean you’re doing anything wrong. While scissoring gets a particularly bad rap, the truth is that every sex act under the sun has folks it just doesn’t feel great to — because of our bodies, sensory profiles, or just personal preference. Plenty of people don’t like oral sex or vibrators; vaginismus and related conditions mean that PIV sex isn’t going to feel good for many folks; that doesn’t mean there’s something wrong with them, and there’s nothing wrong with you (or your partner) if scissoring doesn’t hold appeal.

That said, experimentation and trying new things can be fun — as long as you don’t put too much achievement-oriented pressure on yourself, feel free to keep trying it out and playing with it. Remember that feeling good is the goal, not doing it “right” — if friction with your vulva on another part of your partner’s body, like a thigh, feels good and is more realistic, that’s great too. Interested in scissoring but wish the sensation was more intense or easier to achieve? There’s a whole range of sex toys designed to enhance scissoring.

You don’t! You can easily go your whole life without scissoring (or any other sex act, no matter how popular) and still have an exciting, dynamic, fulfilling sex life. There’s no one way or “right” way to have lesbian sex; the only way to know you’re doing it “right” is to check that you and your partner(s) are having fun.

How To Talk About Sex

What Is Sex Positivity?

How to Think About and Engage with Fantasies