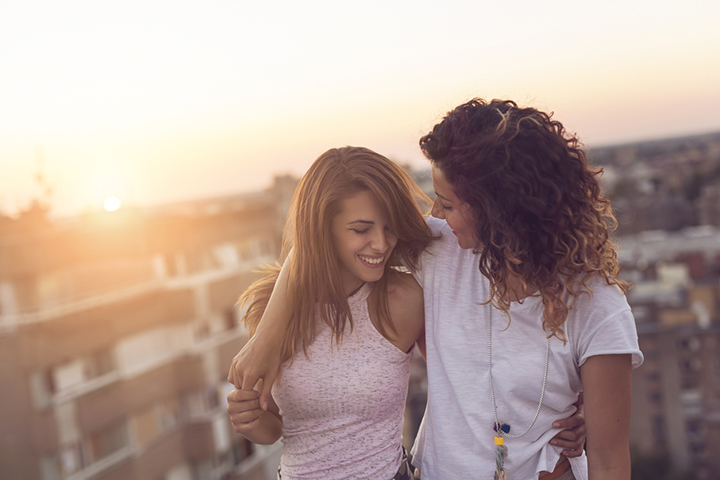 Last week, the internet speculated that Taylor Swift’s strategically dyed hair was “bisexual” because it mirrored the colors of the Bisexual Pride Flag. That got me thinking about the many bisexual women who attend my events and tell me of their struggles with lesbians and their assumptions.

Having just returned from being the Relationship Coach for MTV’s Reality Show “Are Your The One,” with 16 cast members that all identify as sexually fluid, limitations to love based on gender are on my mind.

While there aren’t many studies tracking the US bisexual population, a 2016 report from the CDC noted an increase in those who identify as bisexual. Previous surveys by the Pew Research Center noted that women were more likely to be bisexual than men. While society still has a long way to go, more tolerant attitudes towards LGBTQ people and seeing them in the mainstream are helping more people to be open about their sexuality. As more women identify as something other than straight, I wanted to break down a few assumptions that could hold some lesbians back from finding a great relationship.

The Reality: Sexuality is fluid

While it’s true that LGBTQ communities tend to accept notions that fall outside hetero-normative assumptions, many queer people still think about attraction in mono-sexual terms: you are either attracted to women, or you are attracted to men. During every event, I  hear from at least one bisexual woman who regales a story of someone asking her to clarify her sexuality (“well, you MUST like one better than the other?”).  Yet in ancient civilizations and non-Western societies, bisexuality was part of normal life. In Greece, Rome, Japan, and many others, bisexuality was represented in mythologies and was recognized as a part of life. It’s been argued that we are all bisexual on some level (Kinsey anyone?), with more people claiming a fluid identify, it stands to reason that while we may be attracted to one sex more than the other, confusion isn’t a part of the equation.

Assumption #2: Bi-women are promiscuous and will leave a lesbian relationship for a man

The Reality: A 2018 study had an interesting conclusion: lesbians and gays perceive bisexuals as being more attracted to men than women.

Where a bi-man is seen as a simply closeted gay man, a bi-woman is seen as a straight woman trying to seem “edgy” to please straight men. While  incorrect to assume all people in the gay community are only looking for sexual relationships and shallow connections, it’s also incorrect to assume that bisexual women aren’t looking for real connections, too. Many bi-women desire different partners based on factors like chemistry, common interests, and attraction regardless of gender. Many bi-women seek faithful, monogamous relationships with people of different genders and aren’t any more promiscuous than non-bi folk. To think that you are more vulnerable to being cheated on because your mate is bisexual is a clear indication that you may need to sort out your own internalized homophobia or go out and meet more bisexual people. If that sounds callus and direct: it is. If you truly find that you’re so afraid of your partner leaving you for a man because she is bisexual, you have unresolved issues that have more to do with yourself than your partner.

The Reality: It’s often assumed that bi-women, especially femme-presenting women, are unable to relate to “true lesbians” because they are “half-straight” or can “pass” by being with a man.

Revolving around the assumption of her perceived straight privilege, this assumption ignores that the relationship is inherently not “straight” because one person doesn’t identify as straight. Bi-women don’t hide their identities under a guise of heterosexuality any more than a lesbian might. On the issue of “passing,” many a feminine-presenting lesbian will regale you with stories of how invisible she has felt in the queer community. Potential mates assume she’s straight because she has long hair, long fingernails or is wearing a dress. In fact, Femmes feeling frustrated with not getting picked up while in a lesbian club is a common topic at my Lesbian/Bi Single Mingles. It’s how they come to my events – because they know  everyone there is queer and there’s no question (For more tips on being a Femme Lesbian, check out my advice on YouTube).

If I learned anything during my time interacting with cast of Are You The One, it is this: This cast, made up of sexually fluid individuals are just like anyone else. They struggle, they love, they have a hard time making decisions, they get confused when a lover doesn’t text them right away – all of it! What they aren’t confused about is they’re sexuality. They are more open, have less barriers and limits on themselves and  their fluidity will make for a really entertaining viewer experience (especially for those heterosexual folks who have little no exposure to gender queer or sexually fluid people).

As queers, we have all experienced some pain and trauma of having to conform to a hetero-normative world and internalized homophobia. Bi-women are no different and you shouldn’t fear them.

If you find that you really have a hard time with someone who is bisexual, deep dive into that. Talk to a therapist, find an open and loving bisexual friend who might help you unpack that fear or maybe just do some research on your own. There’s a great article on Bustle all about the History of Bisexuality. If you’ve been burned in love by a bisexual woman, talk to a professional who can guide you a place of acceptance and love instead of fear and hate. Or maybe you’re just feeling less than confident about lesbian dating in general – we’ve got a great blog post on that too!  The bottom line is, we’re all doing our best with our lives and our loves and bisexuals are just another type of person in this world.

Go forth and find the righteous love that you deserve!