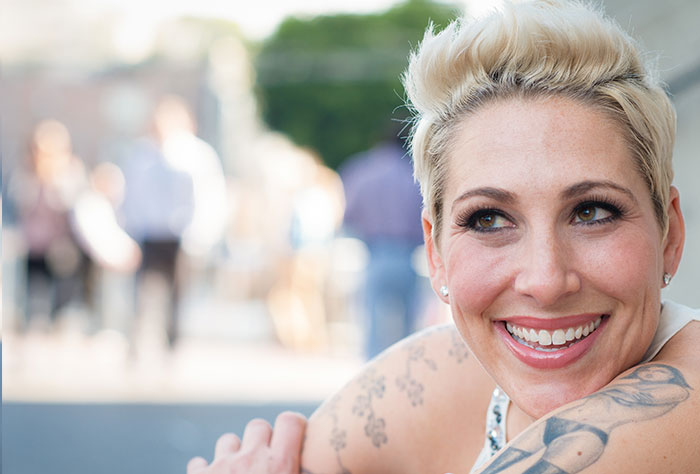 This piece originally appeared in the online publication Westword on Feb 16, 2017 by Kyle Harris

Frankie Bashan is one of the few speed-dating gurus who gears events toward lesbian and bisexual women. Her company, Little Gay Book, will be hosting its first Denver-based speed-dating event, Fast Flirting, on Sunday, February 19, 2017. Her trans-inclusive dating events are based in her life’s work as a clinical psychologist and a matchmaker. With Valentine’s Day over and a whole new year to find love, we thought we’d ask Bashan about her events and why people looking for love so often fail to find it. Here’s what she said.

Westword: Tell me what you’re coming out here for.

Frankie Bashan: We are excited to expand our Fast Flirting events to Denver. We’ve been doing them for years in the San Francisco Bay area, New York City, Honolulu, and now we are continuing to expand.

How do these things work? What are they like?

We have somebody who runs it. That’s going to be Stephanie Serra who’s running it. She’s a native to Denver. You check in. It’s high tech, because we use an app to run the actual event. You basically upload a photo and put in the basic demographic information about yourself, and then you put in your preferences.

You might be interested in meeting women who are five years older or five years younger than you. You can put in your range, in terms of age, upper and lower limits. And then you can indicate how you identify on the male to female spectrum, in terms of masculinity and femininity. You can also blend the kind of women you’re attracted to.

The more people who attend the events, the better the algorithm works. Basically, once we start, you have a badge on with a number and a name. You get a text message that says, say, go to table five to meet match number eight, and her name is Alyssa. You go to that table and you sit down and have a conversation for five minutes. Then you get a prompt through a text. Often the women are so engrossed in conversation they don’t notice they got a text. So we walk around and remind them to check their phones and put in their preferences, in terms of, would they like to see this person again for friendship? Would they like to see them again for a date? And then they can chose neither. Then they get up and move to whatever the text says. Go to table two, to meet so-and-so. It goes on like that. Depending on the number of people and the duration of the event, it can be anywhere from three to eight minutes. Usually it’s about five minutes on average.

What makes this stand out from other similar events?

It’s very organized. Often times these events are a mess. Everybody that works for Little Gay Book is very passionate about it. We’re developing a community where it’s not just, “Hey come out to a singles event for a one-shot deal.” It’s “Come out. Become a part of an amazing network of women that help support each other, are in a safe environment where people can feel comfortable.” We are all inclusive, as long as you are female-identified. If you’re trans, you’re welcome. We’re developing a community where people can just feel safe and welcome. I’m very welcoming of bisexuals, as long as you’re female. Guys will try to come to the events that are bi or whatever and want to meet women. But it’s just all women. That’s another way that we’re different.

The people running the events are really passionate about what we do. There’s a lot of excitement around it and a lot of positivity and acceptance, in terms of age, butch-femme, ethnicity, race, religion. It’s pretty welcoming. And also, we’ve been around a long time. I opened this company in 2009. It’s pretty boutique. I’m involved still. I’m involved in just about every aspect of it. I oversee it.

Also, we use technology now. For years, I would rotate people myself and then I’d have a score card, and then I would tabulate the matches, and I would e-mail them their matches. Now, it’s all done through an app where there is an actual mapping algorithm, which is cool. It’s like speed-dating on steroids. I don’t know if that really sets me apart, but I’m one of the only matchmakers in the country who only works with lesbian and bisexual women. I’m the only woman in the country that is doing only that. Most companies out there only work with heterosexuals and they only do lesbian matchmaking and events as an adjunct. On top of it, I’m also a clinical psychologist who has been working for years with couples and individuals and singles and families. I have a lot of clinical experience and education and that sort of thing.

What do you see as the common pitfalls for people looking for love and failing to find it?

Sadly, I think it has a big part to do with online dating: all the dating apps, all the online dating companies. We’ve all become kind of addicted to this idea of swiping. We keep thinking there is someone out there better for us, and what happens is we’re perpetually feeling lonely and single as a result, because we don’t spend enough time nurturing what’s right in front of us. You know, we get an e-mail. We may not be consciously wondering, but all of a sudden we get an e-mail. You’ve been seeing someone for a couple days. Then you get an e-mail from a potential match and you’re like, “Wow, she’s cute, cuter than the woman I’m dating. I need to check her out.” And then it derails you. You go on to the next thing. Even if you’re still going on the third or fourth date with the woman you’re going out with, you’re sort of preoccupied with nurturing something with someone else potentially, and it just takes away

from the level of intimacy or the level of vulnerability that you show up with — even if you’re not conscious of it.

That’s it right there. People are really lonely and perpetually single because of it.

It’s really depressing. It’s insane. It’s only getting worse. I’ve watched it now, look, how many years? Since ’09, I’ve watched it really closely. The culture of online dating has just gotten worse and worse and worse. We treat each other worse every year. Now there’s a phenomenon called ghosting that people are so familiar with, and it’s awful. And dishonesty. People lie about their age. They say their interests include things they have no interest in, because there is a sort of ideal profile, and you learn how to write that ideal profile. They have people who are writers, copy editors, who are just writing online profiles.

I have a former journalist friend who was doing that for a while.

Sure. There’s money to be made there.

Say you go on one or two dates. We’re like, “Wow, we’re really great.” You know when you feel something is really great, you’re not the only one bringing that energy into that. The reason why you’re feeling great is that the other person across the table from you is also bringing that energy. So it’s the combination that makes a date successful. You know you’re on a date and you think this person’s cute, but they’re not that interested. You can kind of tell, and you’re therefore not that interested in them. But when you’re both really vibing, you’re connecting and then all of a sudden, either after the first date or after the second date, when you might talk about getting together again, that person completely disappears, stops responding to text messages, stops responding to e-mails or calls, and that’s the end of it. You don’t hear a word from them again. Nothing. I’ve heard of it many times, too, after having sex, after the fifth date, you have sex and then not a word. Just left like that.

Do you feel the in-person speed-dating avoids some of that?

Yeah, I do. Because you see the person in their entirety. You’re not looking at a profile beforehand and getting preconceived ideas about who this person is or what they’re like. You’re actually with them in real time, connecting with them more organically. And even if you would naturally swipe to the right on them, if you’re sitting in front of them, you’re feeling their energy, you’re sensing their personality, you’re engaging with them in that five minutes. It’s much more personal and much more intimate than you’ll ever engage with somebody on a dating app. So there are going to be people who would be rejected and that when they meet in person, they actually hit it off.

I’m interested in the thought process behind billing it as an event for bisexual women and also having it be a women-specific event. There is something really refreshing about that. Can you unpack what you’re thinking there?

Not why you’re including bisexuals, but why it’s prominently billed in that way?

There are very few inclusive events in the queer community for bisexuals and even fewer for transgender folks. They’re discriminated against in our community. That’s always bothered me. But what I started to really notice is that there has been a shift in terms of feminine women being attracted to feminine women, in the last five years or so. There is a lot more of that happening — femme on femme. And oftentimes, women who are more feminine — what I have found — identify as bisexual.

So, if you are trying to create an event where there are more feminine women who want to connect with feminine women, you have to open it up to bisexuals. Otherwise, you’re going to get strictly lesbian identified women who tend to be — when you look at the spectrum of femininity and masculinity, they are not on the high femme side. They might be somewhat feminine. They might be androgynous. And then there’s the whole butch spectrum. I think that I am responding to an interest or a desire or demand in the community, which means that it needs to include bisexuals.

It’s so rare to see anything so prominently inclusive, where bisexuality is not some tacked-on possibility — and if it is, particularly for bi women, it becomes this feeding frenzy for men, which is so disturbing.

I don’t allow them. They try to get on my Meetup all the time and join the Meetup, right? Yeah. They want to date a bi woman, and it’s like, “No. You have to be a female.” That’s also how it’s different and protective and safe. This isn’t about having the threesome or whatever. It isn’t about getting with someone who is bi and fetishizing it. No. I do have people, even bisexuals, who contact me and say, “Is this really bi? Are we really welcome?” because they can’t even believe it. They don’t believe that what they’re reading is real. I sometimes get women who are pissed, lesbians who are mad that I’m including bisexuals because they say they don’t want to date bisexuals, so they don’t want to come to the event. I say, “That’s okay. Then don’t come to the event. Go to another event. I’m sure you can find another event out there.”

Yeah, but it took me years. Now, it doesn’t matter. For those one or two people who want to protest and not come to my event, that’s fine. I’ve got another thirty who want to show up.

Fast Flirting will take start at 2 p.m. Sunday, February 19, at Briar Common Brewery, 2298 Clay Street. For more information about Bashan, including her upcoming downloadable course The Dating Decode.  $40, are available there through February 17, 2017.