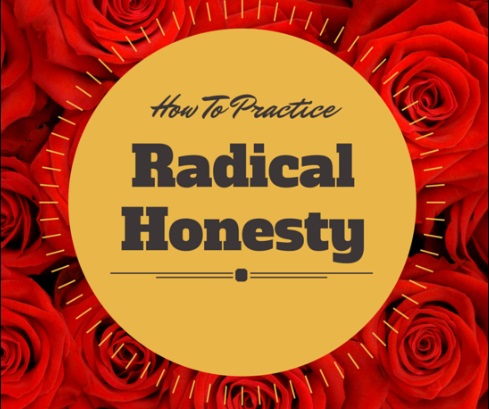 Radical Honesty involves stating your feelings bluntly, directly and in ways typically considered impolite.  For example, “I’m disgusted with you for X” where X is a statement of objective observation about the person towards whom the comment is being directed. The idea is to shift from the acceptable norm of “white lying” for the purpose of having a more truthful relationship with themselves and others.

According to author Dr. Brad Blanton, “Lying is the major source of all human stress,” and the most profound behavior leading to disconnection in intimate relationships.

Dr. Blanton further explains, “Many of us learned as children that being fully alive was bad and you got hurt for it, so we deadened ourselves: partly as a defense against the big people, and partly to spite them. Deadening ourselves was our way of hiding that we were alive in improper ways, and the only thing to do was to keep it a secret.”

To be radically honest, you must :

How to Construct an “I Statement:”

Use this “I Statement Template” when wanting to express yourself:

After you’ve expressed your feelings, allow your partner to digest it.

She doesn’t have to DO anything, she just has to listen. You state how you feel, she listens and then you move on with whatever you were doing. If you expect her to fix your feelings or remove them, then your expectations need realigning (again, no one can make you feel anything. Including happiness.). If the two of you have time, discuss it and see if you come out of the other side of your feeling and/or get to a place of resolve.

But what if you’re SO hurt by something she said (or didn’t say) and you just want to cry and you can’t talk about it? Well then, that is the time when you NEED to express yourself.

That is the moment when you need to pull her aside, in between your tears, and tell you her, “I feel hurt that you don’t want to have sex with me because I understand that as rejection.” See, that’s being honest (and vulnerable). You’ve just expressed how you understand a behavior to mean something, and now, you have something to work with.

And what if your mate just can’t take the honesty? What if she hears that you’re feeling hurt and crying and she just shuts down and doesn’t want to be present with you?

Well then, that is the time to be honest too. If your mate can’t handle you being real in front of her, that’s something to pay attention to. She’s obviously not in a place of connection with you and while that’s painful in and of itself, it’s the reality. See, you’re getting real.

The key takeaway: If you come from a place of vulnerability instead of blame, you invite your partner to look for a solution with you.

Radical Honestly isn’t for the weak.

While you don’t need to be perfect, you do need intent (from both parties). If one person isn’t into it, it’s just going to cause stress and that’s exactly the opposite of what you’re trying to do. Perhaps attempt to use the principals, in a way that feels more authentic for the two of you and watch how it works (or doesn’t).

Use your own kind judgement.

If your partner is admittedly having a bad day, it’s probably not a good idea to bluntly state how you’re irritated that she took the driveway parking spot again. Write it down, make a note and bring it up later when she’s not as triggered. The point is that you want to get out of the “habit” of lying, releasing resentments before they build and dealing with issues as they arise.

I could not have written this piece without the wealth of knowledge already existing about Radical Honestly. Some of my favorite resources include:

Communicate with “I” Statements by Kevin Fitzmaurice

Naming Elephants: 10 Ways to Use Radical Honesty to Improve Your Relationship

I’d love to hear from folks who have used Radical Honestly: What was your experience? When did you decide to be honest with each other? Did you notice an increased level of intimacy? If you don’t’ feel comfortable leaving a comment, please drop me a line at drfrankie at littlegaybook dot com.