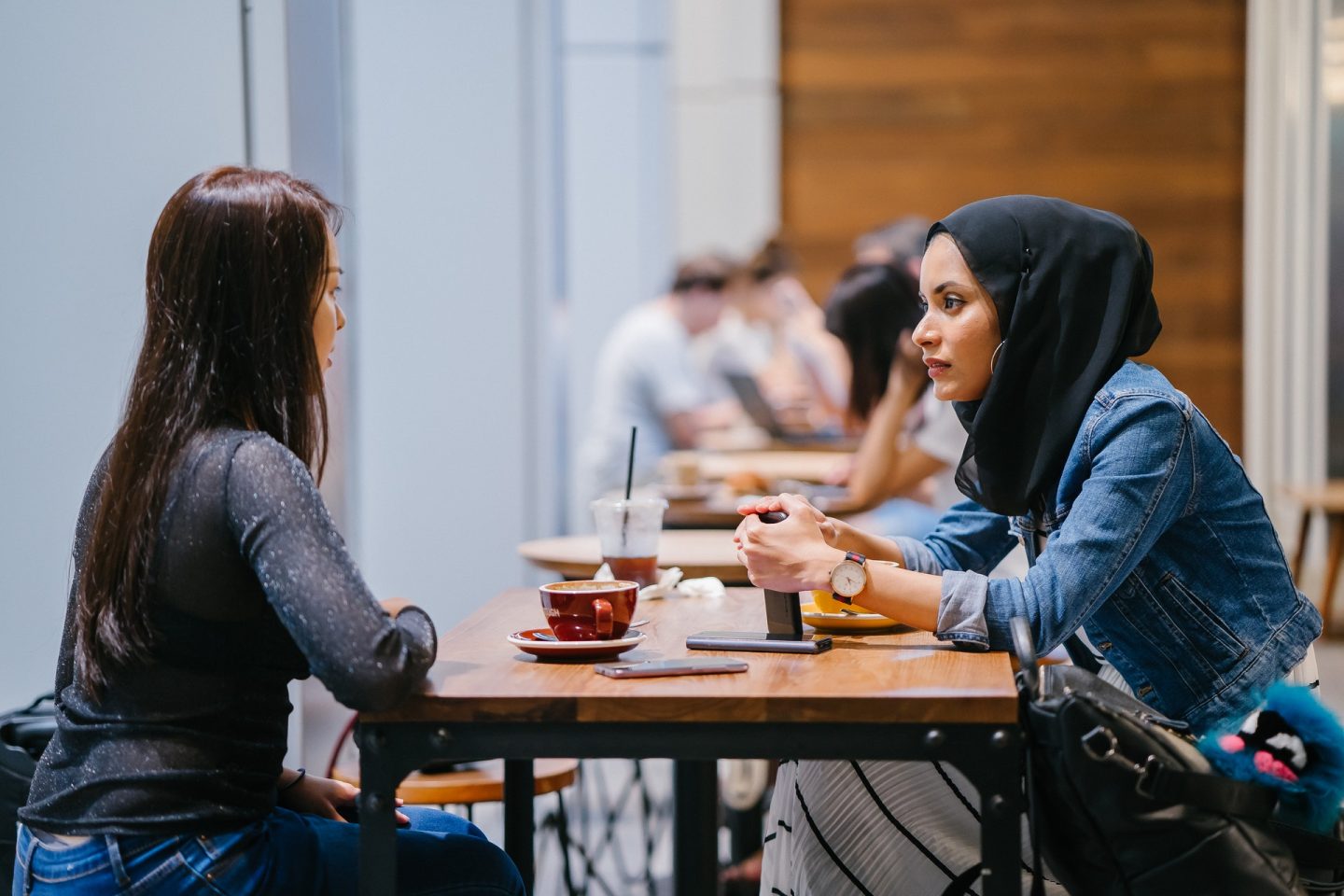 I get it: sometimes other people just have bad opinions. But if you usually tell them that, and especially if you use those words, you’ve probably noticed you’re not having a lot of luck getting them to change their minds – or even getting them to engage with you. So how do you successfully talk about sensitive topics, especially since right now they seem to be everywhere, and talking about them seems more urgent than ever? Pick a goal for the conversation, stay gentle and open, and make your exit long before things get dicey. Here’s how.

Determine What You Want to Get from The Conversation

So you want to have a discussion with someone who has different views from you. Why? No, really: What’s your goal in having the conversation? Figuring out what you want to get out of it can help keep you from getting overinvested or off track. And be realistic – ambition is hot, but “I want the other person to admit that they are wrong, to immediately abandon their views, and to fully internalize mine instead” is not going to happen. Yes, even if your views are correct. (That’s how they feel about theirs, too.)

Instead, pick goals that are realistic and easily attainable. For instance, getting more of an understanding of why someone thinks the way they do could be a goal of an online conversation. Engaging in the discussion but switching topics before things get too intense could be the goal of a conversation with a loved one. And highlighting inconsistencies in someone’s thinking in a graceful, non-judgmental way can work in any context. What makes a good goal in this context is that it depends on what you can control – how you approach and respond to the conversation – and not on what you can’t – any outcome from the other person whatsoever.

Treat the conversation like an opportunity, rather than a demand. Set yourselves up for success by talking in private – in a one-on-one chat instead of over social media, or in a private space instead of in a group. And see yourselves as on level ground, with different experiences and resources that have led you to explore the beliefs you now hold.

For many of us, our beliefs and the way we see the world are deeply personal and tied to our sense of self. Someone challenging those beliefs can feel like a personal attack, especially in an era when the stakes are so heightened. This means you should try to focus more on personal experiences and less on facts, numbers, and studies. You can find a study to say almost anything, but so can they, and a personal argument along those lines is unlikely to be productive. Instead, talking about your experiences can keep communication more grounded and focused on the bigger picture.

And whatever you do, don’t name call, belittle, mock, or otherwise talk down to your conversation partner. If you find yourself getting frustrated, take that as a sign to end the conversation for now.

Asking questions, listening, and repeating back what the other person says (“So let me make sure I have what you’re saying…”) will all create a more productive conversation than waiting until the other person takes a breath so you can hammer away at your point. After all, you can’t learn how their experiences relate to their beliefs unless you listen to what they’re actually telling you about that. Focus on listening, and on identifying the common ground between you, and not on your own arguments.

If things start to get heated, become attack-based, or seem like they might be on that path, end the conversation in a way that leaves the door open for another in the future. “I think there’s lots to think about here so far, let’s take a break and come back to this later,” “Thank you for taking the time to talk a little with me. Let’s pause but I’d love to talk again soon,” or even “I’m getting a call from my [excuse], can we come back to this later?” can be ways to leave communications brief and effective instead of out of hand.

Why keep it short? One discussion probably won’t be enough to win someone over – but it could be enough to stop them from ever wanting to talk to you again. If you’re doing your job right and holding space, asking questions, focusing on their experiences, and actively listening, it might be hard for you to sustain that over a long conversation. Especially on-topic. Entering the conversation with the intention to keep it shorter will make it easier to engage a little, stop before things get heated, and leave the door open for next time.

Is Doomscrolling Ruining Your Relationships? Here’s How to Stop.