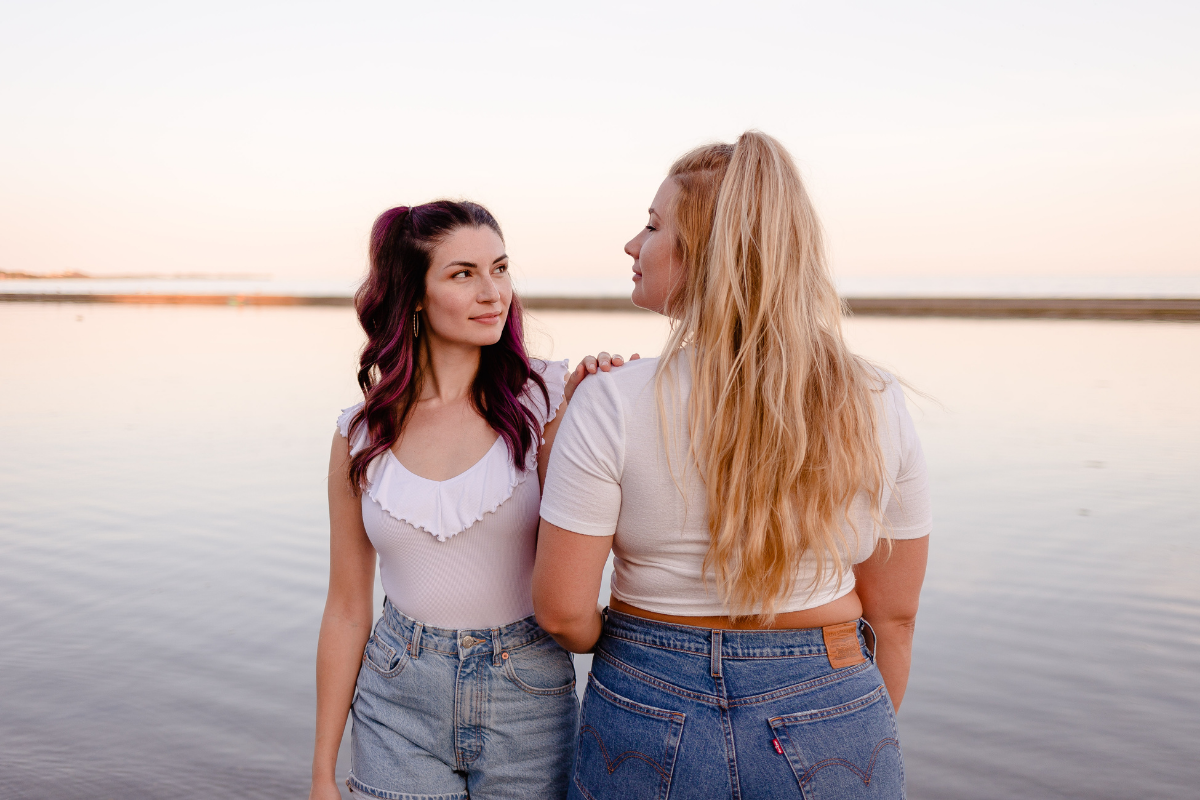 Lesbians and queer women can be more accepting than our heterosexual counterparts in a lot of ways – but many of us still have blind spots, and body size can be a big one. Particularly when we lead healthy, active lifestyles ourselves, we often want partners who do the same – who will go to the gym, get up early for a morning hike together, and swim with us when we go to the pool instead of barely putting their feet in. Sometimes we think of this as “athletic,” and sometimes we think of it as wanting a partner who “takes care of herself.” But it’s important to look at what we really mean when we say these things, and to unpack and deconstruct our ideas of the people – and types of bodies – who our internalized phobias might lead us to write off. Below are some myths about body size, and what you need to know as you think not only about others’ bodies but also about how you see your own.

Myth: Skinny Is Healthier Than Curvy

Nope. People can be healthy – or unhealthy – at any size, and you can’t tell just by looking at someone how healthy they are.

For those who consider body mass index to be an “objective” way to draw lines around “healthy” and “unhealthy” body size, it’s worth noting that BMI has a hidden racial bias. It also fails in other ways: it doesn’t include bone or muscle mass, classifies many CrossFit folks as “obese” when they are “ripped,” and was never intended as a healthy weight classification system anyway.

Still nope! A lot of people, especially people with internalized judgments around body size, have a lot of trouble letting go of the idea that one size or shape – a smaller one – is healthier, more desirable, or just better than any other. Often, there’s a lot to unpack in such thinking, but the main thing to remember is that everyone is different, every body is different, and you can’t tell anything about how successful, engaged, driven, healthy, active, intelligent, energetic, or strong someone is just by looking at them and making a snap judgment.

Myth: You Have Total Control Over Your Body Composition (And So Does Everyone Else)

If you’re naturally lean, strong, and healthy, congratulations, you won the body norms lottery! Particularly if you also work out or put effort into eating a particular way, it can seem like everyone should be able to operate the way that you do or achieve similar results. But in fact, gender, genetics, age, race and ethnicity, hormones, metabolism, family, socioeconomic status, and possibly even past virus exposure can all play a role in body composition. Intergenerational trauma may also be a factor. You wouldn’t want anyone else to make assumptions or comments about how you take care of your body – so extend that same care to everyone you meet.

Myth: Okay, But Have You Tried…

…Going vegetarian, vegan, gluten-free, Keto, paleo, and intermittent fasting can all feel great for some bodies and terrible for others.  Keto destroys gut health, paleo can lead to heart disease and is made up, and there’s a very fine line between intermittent fasting and disordered eating and between “eating clean” and disordered eating. If you’re following one of these diets – excuse me, wellness lifestyles – with medical supervision and it’s making you feel good, then keep doing what’s working for you.

But don’t try to impose your habits on others. A growing body of evidence suggests that even identical twins react differently to the same foods consumed in the same ways, so all you’ll accomplish is alienating whoever you’re talking to. Your “suggestions” also might be coming from a place of assuming curvier people are unintelligent, naive, or lazy, or from a place of internalized weight bias – but even if you don’t think that they are, it’s important to remember that you can’t know what anyone else is doing with their body or what their situation is.

Myth: “Fat” Is A Four-Letter Word

The word “fat” is a descriptor, like “gay” or “blonde” or “tall.” But as Ashleigh Shackelford writes, the word is often weaponized against fat people. Shackelford writes: “Through a strong community of other fat people, and the process of realizing that fat is not a bad word but a powerful one, I now see fat as not only my personal power, but one that can change the world for everybody. […] Certainly, fat people are not a monolith, and we do not all feel the same way about reclaiming fat. But to embody freeing ourselves from systems of shame that depict fatness as inherently nonhuman or as a failure is something many of us commit to, consciously and not.”

Where Can I Go To Learn More?

Fat is a queer issue and a feminist issue. Want to learn more about the cultural relationship with weight and body size but already finished watching Shrill? Roxane Gay’s “Unruly Bodies” project at Medium is an excellent look at living in bodies that are considered transgressive. Also at Medium, Margot Q has a fatphobia and the queer community primer and resource guide. At Electric Literature, Virgie Tovar recommends books for a personal body revolution. And at Wear Your Voice, Da’Shaun Harrison recommends a reading list around body and desirability politics.